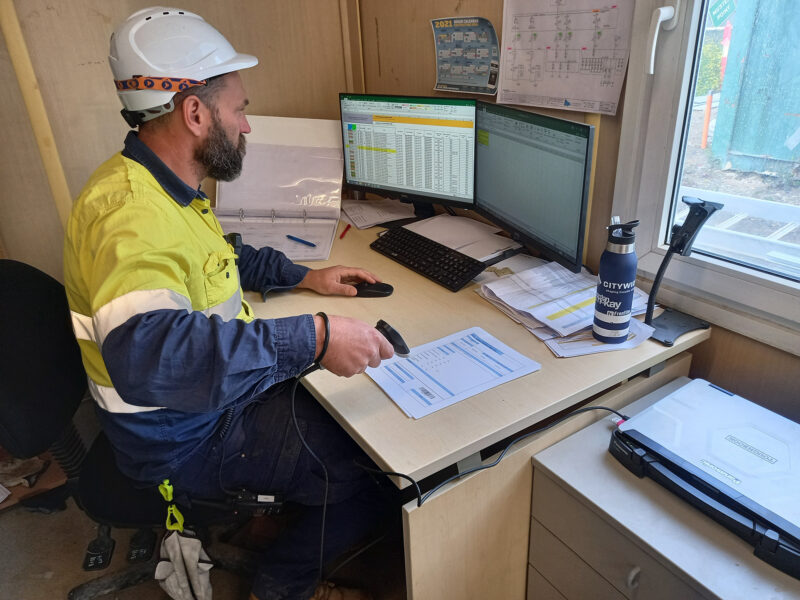 A little barcode scanner that cost $250 is fuelling an efficiency revolution for the electricians at Gordon McKay, who say it will save them hundreds of hours on some of the largest electrical construction projects in Victoria and Tasmania.

The handheld scanner, used with an app that creates barcodes for it, is the brainchild of Andrew Smigowski, Gordon McKay’s Electrical and Instrumentation Supervisor, who used to spend up to 10 hours a week typing in the details of cable ‘terminations’ into his project spreadsheets. Now that process is completed in seconds – simply by scanning a barcode on each cable record.

Andrew is currently putting the system through its paces at Boral Cement’s new plant at the Port of Geelong, where his team are installing 3,000 power and control cables across the 5,000m² site of one of Australia’s largest new cement plants.

“Normally tracking these cables would involve inputting details when either end of each cable is connected – which, in this case, means 6,000 separate data inputs,” explains Andrew. “It’s not just knowing when each cable is terminated and ready for testing, but being able to see when all the cables in one section of the project are completed, so you can do the testing more efficiently.

“If you consider these multiple efficiencies, this little scanner is literally paying for itself every hour or two!”

Now, where Andrew used to take a cable installation record from each electrician and painstakingly copy its details into his computer, he can just scan the barcode and it will automatically show up on his spreadsheet as ‘50% terminated’ or ‘100% terminated’ – meaning both ends of a cable have been connected, and are ready for testing.

“On some jobs, you can have 15 people bringing in 60 to 80 of these records each day, and it can be a real headache to reconcile it all,” says Andrew. “But on this job, this little scanner is saving me more than two hours each day just in tracking and recording cable completions.

“You can imagine with jobs on a multi-storey building, where you have dozens of electricians fitting cables, power-points and light-switches on every storey, it’s going to be saving us considerably more time than that.”

Andrew developed the digital tracker from an existing system, which he “tweaked” to cover Gordon McKay’s comprehensive pre-termination checks – which include everything from the tension and durability of cable connections, to their shrouds, glands, Earthing and labelling.

“This the first major job we’ve used it on, so there’s still room for it to be finessed and perfected,” says Andrew. “But once it’s operating at full potential, it’s going to be saving us hundreds of hours on every project.”

Gordon McKay, which became a subsidiary of Citywide last year, has committed up to 25 electricians to the 18-month Boral construction project, which is due for completion next February. The project represents one of the largest new clinker grinding and cement plants to be constructed in Victoria in recent times.

Gordon McKay is a business of Citywide Utilities and Energy, a division of the Citywide Group.

For media enquiries, requests for interviews with Gordon McKay management or our subject matter experts, contact:

Who we work with
Why we are trusted

We pride ourselves on our standard of work and we have the awards to prove it.